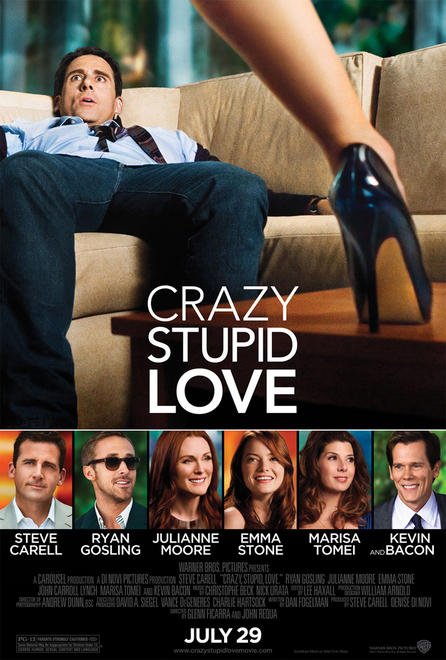 Entangled with preposterous coincidences and constrained situations, Crazy, Stupid, Love. is a hampered romantic comedy that only occasionally grasps the humor and challenges of relationships. Striving for complexity and achieving nothing but convolution, it impedes a brisk pacing with excessive subplots that lose sophistication in their ridiculousness. Many of these are merely constructed into a contrived culmination, miring the originally lighthearted spirit of the film in leaden monotony. Offering little originality beneath its seemingly slick surface, 'C, S, L.' diminishes in its superficial and prolonged discussions of "fighting for soul-mates," opting to detail the cliche maturity of adults through the banal discovery of true love. The star-studded cast is not to be inculpated for this calculated sentimentalism - their beautifully suave Gosling and overall comedic skillfulness endow the film with sharp satire. However, such wit and precision is rarely matched in a muddled romance that sheds little authenticity and realism on the vast expanse of love. 2 out of 4 stars

Reply Vibrators
10:32 AM on June 1, 2019
Steve Carell as a suburban everyman who discovers that his wife is cheating on him, in Crazy, Stupid, Love. Credit Warner Brothers Pictures