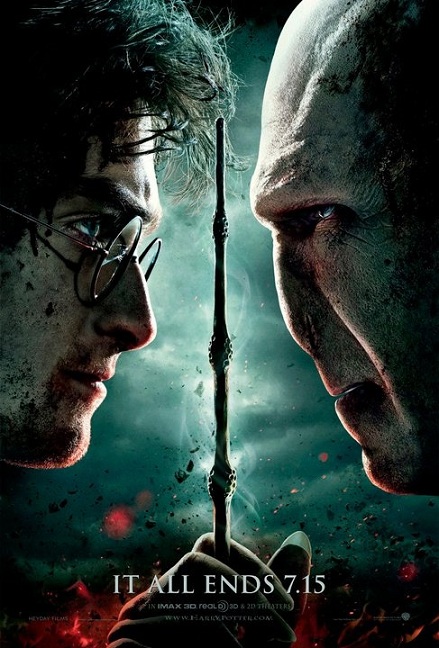 The End Is Here

Thrillingly capping one of the most phenomenal cinematic narratives in history, Harry Potter and the Deathly Hallows: Part 2 is a wicked film that reaches an emotional and action-packed climax, capturing magic at its finest. Boldly presenting several majestic battles with state-of-the-art visual effects, the film is unrivaled in its epic grandeur and graphic mastery, melding heroism with the somberness of war in showcases of apocalyptic destruction. The industrial touches never blur the narrative coherence or emotional power of DH2's intimately observed characters, who are portrayed by a cadre of Britain's finest actors. Translating an innocent children's tale into a story of human struggle, the film's heartwarming resonance and emotional realism bridges the break between art and craft, endowing even its inhuman creatures with anthropomorphic effect. By the euphoric yet heartbreaking end of this final movement, a magical book will be closed with Wagnerian rumble, tears of bittersweet joy, and memories of the day when Harry & Company left 9 3/4 to begin a truly unforgettable adventure. My, how they've grown.

Thank you, Harry Potter, and good-bye. You will always be remembered as the Boy Who Lived, from the days of the disrespecting Dursleys to the triumphant moments when you emerged as a hero to the Wizarding World and, above all, our own vast world of Muggles.    4 out of 4 stars

Note: Please watch this outstanding video, which culminates all the years of Harry Potter films into a touching and poignant viewing:

Reply The Cellist
9:33 PM on July 21, 2011
great review and "tribute" so to speak to harry potter. its so cute to see the tiny little kids in movie 1 and the adults in movie 8

Reply James
8:21 PM on July 24, 2011
cool writing. more of a tribute than a review though (not saying that's bad, for this movie at least)
isn't the font kinda weird?