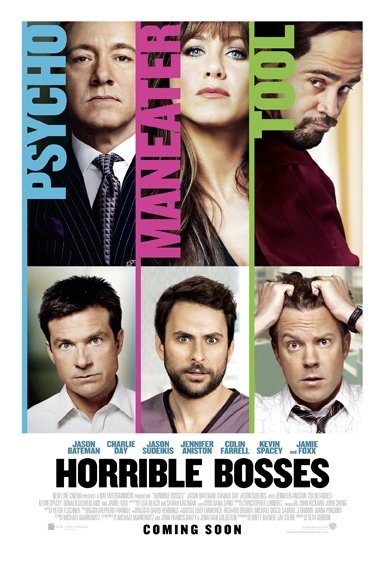 In spite of its excessive sexual references, Horrible Bosses is a hilarious black comedy that melds superb performances with laugh-out-loud humor to create an interesting film. Through wonderful banter, the film's naturally hysterical stars connect together with blooming chemistry, and sustain their likability and convincingness throughout their cleverly structured and uproarious adventures. The equally fantastic supporting cast provides memorable roles as sadistic bosses who radiate wit in their exaggerated antagonism. It is this intelligently assembled cast that buoys the film when its narrative coherence drowns in increasingly outrageous comic situations. The film's overbalance of raunchiness over realism is quickly overshadowed by the comic talent and charm of these protagonists: the true superheroes of our tough economic times. 2.5 out of 4 stars