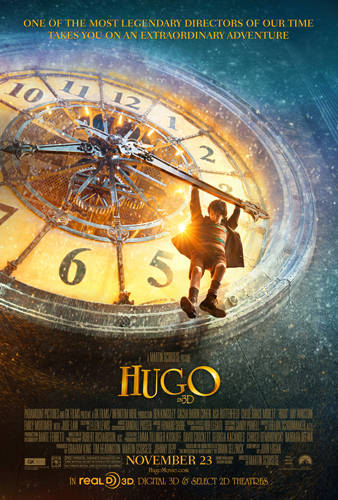 Rated: PG for mild thematic peril, some action/peril and smoking.

"The Invention of Hugo Cabret" immersed readers within a fascinating world, meshing tales of a lost young boy, an adventurous girl, and a forgotten filmmaker like the beautiful clockwork at the center of its plot. Its film adaptation "Hugo" fails to do the same, lacking the enigmatic spark and thrilling storytelling of its source material. Director Martin Scorcese radiates his love for filmmaking in this movie, an homage that affectionately remembers the days when films were artistic sensations created by visionaries like George Melies, a character in "Hugo." That name may mean little to contemporary film audiences, but Melies revolutionized filmmaking by infusing visual panache, adventure, and most importantly imagination into the screen. Scorcese's touching scenes with Melies shape one of a great director's greatest love stories - between a man and his camera. But such affection is rarely applied to other parts of the film. Performances from excessively sentimental actor Asa Butterfield and a rather graceless Chloe Grace Morentz are as mechanistic as the automaton and clocks that form the heart of this film. Equally mechanistic is the staid dramatic pacing of a film that, despite its visually spectacular action sequences, rarely evokes the suspense and sheer fascination of its source material. Even worse is the comic timing - for a film about clocks, one would expect it to be spot-on, but a comically stale and unnecessary performance by miscast actor Sacha Baron Cohen merely brings a childish facet to an originally meaningful film. Such clockwork aspects formulate and mechanize an homage to the perfect days of Hollywood, hindering "Hugo" from equating itself with the very artwork it reveres. 54/100

Reply The Cellist
10:00 PM on December 22, 2011
no, no, no i think it deserved at least an 80 for Scorcese's fierce passion evident throughout the film. But another good review, as usual.

Reply Megha
10:35 PM on December 22, 2011
Hugo had brilliant cinematography/animation, but the meandering plot combined with Moretz rendered the movie horrid compared to the book.

Megha says...
Hugo had brilliant cinematography/animation, but the meandering plot combined with Moretz rendered the movie horrid compared to the book.